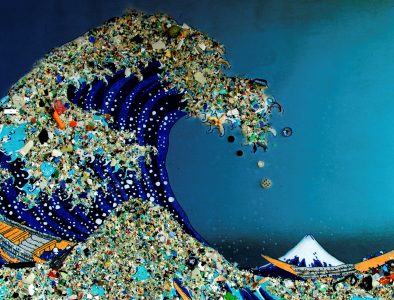 I’m sure that by now we’ve all seen the infamous Blue Planet visuals, of plastic filled waves and marine creatures playing with, eating, and dying from plastic waste. And I’m certain that Sir David Attenborough’s voice, familiar and loved by all, telling us that the responsibility for saving our planet lies with us, was a shocking and hard-to-swallow truism. Perhaps, and hopefully, that was a wake-up call to many, of just how impactful our plastic consumption, and disposal really is on the environment around us.

With 8 million tonnes annually of plastic ending up in our oceans, this year’s World Ocean Day has the theme of “Preventing Plastic Pollution” and encouraging solutions for a healthy ocean. So let’s have a look at just how the plastic in our waters are impacting on not only us, but the other inhabitants of our planet.

After a recent bank holiday heat-wave led to an inevitable swarm to the beach of locals and holiday-makers alike, as a local resident I was angered, and upset, to see the amount of rubbish left behind. Where do people think their waste goes when they leave it on the sand? Who do they think disposes of it? Unfortunately, there is not always an indignant beach-goer (such as myself) who is willing to clean up after others.

Not only is plastic waste unsightly as it lines our riverbanks and beaches, it is a huge hazard to the marine species that encounter it, especially once it ends up in our waterways. Curious marine wildlife, or those searching for food or shelter, may find themselves entangled in waste, leading to pain, injury and death. Marine animals confuse plastic waste with their usual prey – turtles mistake plastic bags for jelly fish, birds mistake plastic pellets for fish eggs to feed their young – and ingestion can cause internal injuries, malnutrition, starvation, suffocation and death. For those animals that avoid direct ingestion, they may become victims of bio-accumulation – animals at the top of their food chain feed on prey that have fed on smaller plastic-fed organisms – leading to a build-up of dangerous toxins, and death. See the pattern? Collectively, our consumption of plastics is estimated to cause the death of 100 million marine animals each year.

Going back to bio-accumulation…if those at the top of their food-chains are affected by plastic toxin build up, does that mean humans are affected too? Yes! There is evidence of an increasingly high amount of micro-plastics, nano-plastics and plastic chemicals in the seafood that we consume. We still don’t know the direct impact on humans of consuming plastics, but I’d hazard a guess that it isn’t recommended for a balanced diet. I don’t know about you, but I wouldn’t willingly order a side of BPA with my mussels.

Many people still don’t think plastic pollution is too much of an issue, as we don’t tend to see too much evidence of it in our own waterways. But that is because, due to ocean currents, our waste ends up floating in ‘plastic waste islands’ (such as the Great Pacific garbage patch), or washed up on the shores of distant island nations. In fact, Henderson Island in the remote South Pacific, had the highest density of plastic on its shores of anywhere in the world in 2017. Now I’m sure there’s a lot of readers who may think ‘well that’s not my responsibility’. Henderson Island is uninhabited. So where does all that rubbish come from, if there’s no-one living on the island to throw it away? From Europe, the US, Russia and South America. That’s right, the plastic we buy, use and throw away here in the UK, is being dragged across the planet, to wash up on the supposedly pristine beaches of innocent islands.

There are organisations worldwide, raising community awareness, organising beach clean-ups, collecting rubbish and creating recycled art. But what if we, living on the other side of the planet, could do something to reduce the amount of plastic washing up on beaches in the first place? With just small changes, you can start to make a difference, and of course, if everyone made these small changes, it would amount to a bigger difference, and a further-reaching impact.

Thankfully, the imposed plastic carrier bag charge has resulted in a huge drop in plastic bag use, and it is wonderful to see more and more shoppers carrying their reusable bags. Here are four more easy actions you can take to help cut down your plastic consumption:

1.     Say no to straws! The UK announced a possible ban on this plastic fiend, although at the moment only a consultation is planned for later this year. So, until then, you can do your bit and request no straw when you order a drink. Even better, buy yourself a stainless-steel straw, and you’ll always be prepared!

2.     Caffeinate consciously! Disposable coffee cups are notoriously hard to recycle, if they even make it into a recycling bin in the first place. When buying your morning coffee, why not fill up your reusable coffee cup? Available in a range of styles, with some suitable for hot and cold drinks, you’ll not only be helping the oceans, but in many cafes will receive a discount too, bonus!

3.     Hydrate happily! Invest in a reusable drinks bottle and help cut down on the 35 million bottles consumed daily in the UK. With bottles available in glass or stainless steel, with straws, filters or built in fruit-infusers, there’s a bottle for everyone!

4.     Curb the cutlery! Plastic cutlery is another big contributor to ocean waste and one that can be easily avoided. It’s all to easy to grab a plastic fork when buying your takeaway lunch, but it’s equally easy to carry your own set of cutlery with you. My favourite are bamboo sets, that are affordable and often come with their own cloth pouch.

There are many ways you can start to reduce your plastic use, and therefore waste, but sometimes it can seem almost impossible. The point is to start. With just a few changes such as those listed above, we can all make a difference to the health and future of our oceans.

So, on this World Ocean’s day, let’s raise a fin and commit to doing our bit.

Check out worldoceansday.org for more information, where they also have a whole host of videos, articles and lesson planning resources, to help bring green thinking to the classroom! And for local events; from awareness raising films, to paddle and pick challenges, be sure to browse the events calendar, and join in protecting our blue planet!