Be the Solution to Soil Pollution

Land, dirt, dust, terra firma.
Soil.
The very ground beneath our feet, the very foundation of our planet.

But as much as we may tread this surface every day, do we really know, understand, and appreciate all that soil means for life on this planet?

Be the solution to soil pollution. This was the slogan for this year’s World Soil Day, celebrated and promoted around the world on December 5th. Soil pollution has been highlighted as one of the main soil threats which is affecting global soils and the ecosystems which live off them (The Status of the World’s Soil Resources Report).

But before we look at what is affecting the quality of our soils worldwide, let’s have a look at just why soil is so important for us.

Soil supports almost every ecosystem across the planet, maintaining and supporting jungles, wetlands, forests, grasslands and prairies. These ecosystems are all home to an incredible diversity of vegetation – some of which we have not yet discovered. These plants provide us with fuel, animal feed, food, medicine, and raw materials for clothing, household goods and other necessities.

Not only is plant diversity supported by soil, but animal diversity too, both above and below ground level. As mentioned, wildlife and livestock animals are provided with food, but what about the smaller scale animals? Microorganisms are the primary decomposers of organic matter, helping to detoxify harmful toxins, and suppress disease organisms. And let’s not forget, soil microorganisms are the source of most of the antibiotic medicines we use to fight diseases! Scaling up, insects who depend on soil, are also the caretakers; with earthworms maintaining soil quality, providing nutrients, and breaking down toxic elements. 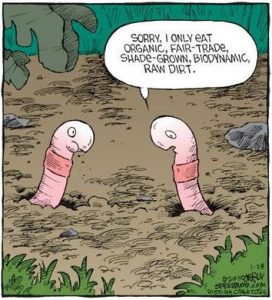 The very structure of soil is also essential in mitigating natural disasters. The ability of soil to absorb, hold, and release water helps to prevent flooding and drought. The way in which soil distributes water plays a key role in the water cycle, impacting rivers, lakes and streams. Soil is made up of both organic, and inorganic matter. The soil organic matter is crucial in our fight against climate change, acting as either a source or a sink of harmful fossil fuels. In fact, soil is our second largest carbon store, after the oceans. So healthy, undisturbed soils mean that carbon can be stabilised, and remain locked away for for thousands of years – helping us to mitigate climate change.

As mentioned above, there are several threats which are degrading the quality of soils around the world. Let’s take a look first at the most prevalent, and the theme of this year’s World Soil Day – soil pollution.

Soil pollution is the out-of-place presence of a chemical or substance, and/or present in a higher concentration than normal, which has adverse effects on any non-targeted organism. Industrial activity has left a slew of harmful, toxic waste, contaminating soil and leaving it unfit for use for years to come. Plus, the use of chemicals in agricultural activity has drastically increased, thanks to modern fertilizers and pesticides. These chemical substances break down organic matter within the soil, which as we know, is crucial for storing carbon, and eliminating toxins. Additionally, this makes soil more susceptible to wind and water erosion, and increases the risk of natural disaster.

Although soil pollution is a main cause for soil degradation, there are several other prominent harmful practices which are negatively affecting soil quality, and leading to devastating consequences. Ploughing of the topsoil buries the rich organic matter deep down, creating a crust which is unable to absorb as much water, or offer sufficient nutrients for healthy crops. Shallow soil means less rainwater is absorbed and run-off is far greater. The movement of humans, animals, and machines compacts the soil, which drastically reduces porosity, again meaning reduced absorption, and greater risk for erosion. 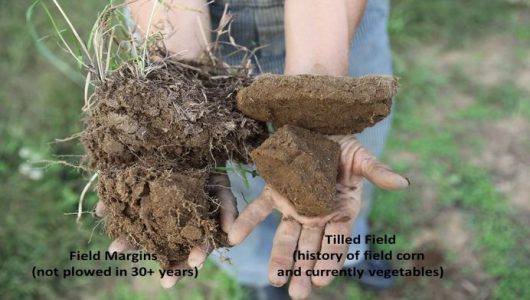 Additionally, overgrazing reduces absorption by removing plant cover, root structure and organic matter. Further, by removing the soil nutrients from the land, and compacting the surface of the soil, the quality quickly deteriorates, leading to reduced absorption and greater run-off.

It’s easy to see the pattern here, of how our modern farming practices, and industrial processes are damaging our soils. But is it as doom and gloom as it sounds? There are many ways in which we can start helping to improve and protect our soils, but due to the extensive damage, solutions needs long-term commitment in order to make a real difference.

Industries have been given regulations for the proper disposal of hazardous waste, to try to minimise the area affected, but we all know that the folk in charge haven’t been particularly bothered about the environment until now (or is that just my cynicism showing?), so these regulations may not enough to ensure ongoing, or any, steps towards improvement.

A champion of bettering agricultural farming practices – Soil Association is a British organisation, which now certifies 70% of organic food in the UK. They  work directly with farmers, on the ground, to test changes in their farming methods that will improve their soil; they lobby the government for soil protection policies so that soil is given the same level of protection as water and air; they encourage farmers to adopt organic farming methods and principles in order to better our soils. Check their website for further ideas on how we can get involved at home. 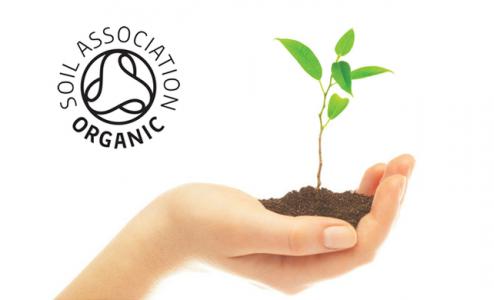 Good agricultural practices are being strongly recommended in order to start building deep and healthy soils. Practices such as using reduced till farming methods, rotating deep-rooted crops, reducing overgrazing and maintaining forests and grasslands, are all ways in which farmers can begin to protect our soils now, for more nourished soils in the future.

Whilst it is clear that large-scale industry change is needed, with the guidance of regulations and organisational support, we as consumers can make sure to do our bit in supporting healthy soil practices. Supporting and choosing organic where possible shows those farmers that their methods are indeed what we want, and what we need, for the sake of a healthy soil structure, and a healthy planet.

We use cookies to ensure that we give you the best experience on our website. If you continue to use this site we will assume that you are happy with it.Ok