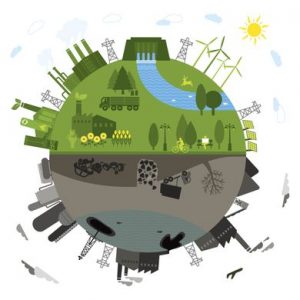 The Growth of Green Energy

Following on from our latest blog, and indeed, the recent climate activism we’ve seen spreading internationally, our attentions are turning to the energy industry, and importantly, the growth of renewable solutions.

Energy and emissions is a continually evolving system to measure, which is why we are loving the following imagery. This fantastic animation from Carbon Brief shows the changing rankings of cumulative emissions since the industrial revolution. Cumulative emissions are a crucial factor in global warming and climate change. Whilst some carbon is reabsorbed, a huge 20% lingers on in the atmosphere, for millennia. So those industrial revolution emissions? Still hanging around today.

Animation: The countries with the largest cumulative CO2 emissions since 1750

We might well celebrate that we drop down the chart, but let’s not allow that to lead us into complacency! Despite our small geographical size, we would be foolish to forget that we contribute a vastly disproportionate amount of CO2 emissions. Are we doing enough to reverse the impact we have already caused? Are we learning from our past practices, and putting into place preventative measures? Are we pushing the alternative possibilities as much as we should be?

Historically, critics of renewable and sustainable energies have decried these alternatives as more expensive, less reliable, and less efficient. (I obviously won’t entertain the other numerous false claims against them, which are based on little more than fake science and scare-mongering). And up until recently, these critics have been somewhat justified, as renewables have struggled to show their worth against their better-known fossil fuel counterparts. But, with increasingly developed technologies, renewable energy systems are becoming more efficient and more viable.

This report from the International Energy Agency shows the steady increase of renewable energy uptake across the globe, and in turn, the moving away from traditional fossil fuels.

Whilst Brazil has the greenest energy mix, “China continues to be the largest growth market for all renewable electricity sources except geothermal and marine as it is responsible for over 40% of global capacity expansion in the 2018-23 period.”

So with (some) emissions-giants seemingly joining the cause, can we hope for a cleaner future with the energy industry? Ecotricity have written a great roundup of their top seven predictions for renewable energy trends in 2019 – it’s a good read! 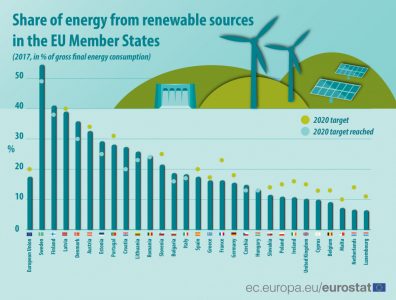 Targets have been set, with the bar very low, but are we even meeting those?

Although the science is there, and the scientists are imploring governments to take action now, we just aren’t seeing changes, or commitments, fast enough. I think, as do many concerned about our planet, that the approach from governing powers has been softly-softly, which isn’t giving us the progress we need. So, instead of waiting for the powers-that-be to take their action up a gear, communities across the country are jumping into action, and taking matters into their own hands.

Community schemes are springing up, especially in remote areas, thanks to funding from ethical banks, and support from environmental groups and organisations. Proving to the big guys at the top, that really all we need is some get-up-and-go attitude towards pushing renewables forward.

Take Mendip Renewables, a community benefit society, who own and operate Whitelake Solar Farm in Somerset. The farm has already generated over 10,000,000 kWh of carbon-free solar electricity in its first two years. That’s enough to power the equivalent of around 1,290 homes!

Or what about the Mean Moor wind farm in Cumbria? It’s thought to be the first UK wind farm which has transferred from a commercial developer, to community ownership. Thanks to 400 individuals raising an impressive £2.8 million in just two weeks, the three wind turbines are now 100% community-owned. This demonstrates how communities are entirely able to operate in the commercial world, and proves the appetite for renewables is yet to be sated. 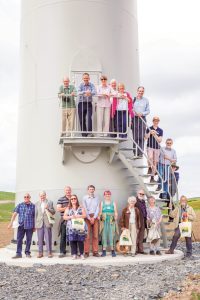 Wind, it seems, is one of our more favourable areas for growth. Really, that should be fairly obvious, it’s pretty darn windy on this little island of ours. Interestingly, the UK actually takes the lead in offshore wind, with the highest installed capacity in the world. And, by 2030, wind will be providing one-third of our country’s energy mix. (Bear in mind, that’s still not a full switch-off from fossil fuels, just percentages here and there). This is according to the World Economic Forum 2019 Insight Report into Fostering Effective Energy Transition.

It all sounds very promising, and obviously, we like to be optimistic here. But 2030 is now only 11 years away. With the IPCC warning us we only have 12 years to sort out our climate crisis (back in September 2018), aren’t we cutting it just a bit fine? I know we all like a race to the finish line, but surely, when it comes to the future of our planet, we’d prefer a clear lead? 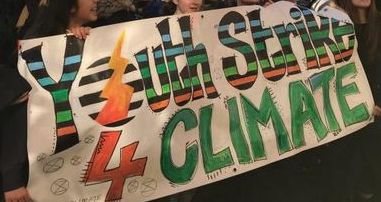 We Stand with our Students

For too long, older generations have dismissed the political views of children and young adults, citing “ignorance” or “immaturity” as reasons to exclude them from policy-making, or even discussions surrounding social issues. But, if these are the individuals who will have to inhabit our earth (long after our current politicians have moved on) why shouldn’t they too, have a voice?

For too long, it has been those same individuals, who have passed the majority of their lives, who have continually failed to act and make the changes that we all need to see.

For too long, we have skirted around the issue of climate change (corporate denial of climate change began way back in the 1970s) and taken a softly-softly approach. That hasn’t worked. And it will continue to not work. We think it’s time for a change. Young people know it is time to change. 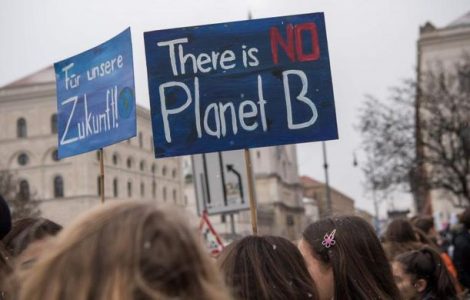 Not only does climate change signify a very real cloud of doom hanging over our heads, but it literally means the possible end of our world, as we know it. For those of you who have lived your better years, congratulations. For those of us who have most of our lives to come, good luck. For those generations not yet born….we don’t know what we’ll be leaving you.

As of October 2018, scientists have declared we have a terrifyingly small number of just twelve years in which to act*, if we hope to reverse the changes we have so far brought upon our planet. Twelve years. That’s fewer years than the number of compulsory years in education, by the way.

After those twelve years….well let’s just say, good for you for those who have already started drawing your pension. And therein lies the problem. Our policies, laws, regulations and (in)actions have been ‘decided’ by generations of folks who simply don’t have the personal interest in ensuring our planet continues to be a habitable, healthy, and sustainable place to live. Although, I can’t wrap my head around the ideology that people simply only care about the planet whilst they are living on it. Whatever happened to longevity? Human compassion? Concern for life other than your own?

For too long, these inactions have meant the steady decline of the health of our planet. And now, it isn’t a steady decline, but a rapid race downhill into a ditch from which it is becoming increasingly harder to rise back out of.

So, here at BGE, we have been delighted and inspired by the young people taking a stand for their future, and the future of our planet. Because that’s what climate action will enable. Building and working towards a healthier, more sustainable home for this generation, and for generations to come. This to me, appears to be a major difference. Young people today aren’t considering only their short lives spent on this planet, but ensuring it will remain for their successors too. They know the cost of caring for that future, and are seeking the promises of a future that previous generations were gifted, and did not pass on.

These past few months have seen a new wave of uprising. This wave however, is not of policy-makers finally taking the responsible and active steps away from our inevitable destruction. But it is a wave of students – children, teenagers and young adults, squaring up and demanding “just why are you still not doing anything?” Students who are tired of inaction, frustrated at immobility, and scared of the uncertainty of their future. 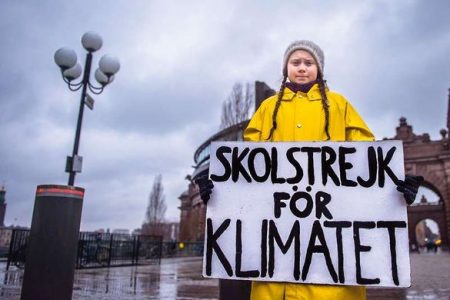 Greta Thunberg, aged just 16, galvanised the movement of student protests with her decision to start skipping school, and protesting outside of government buildings in Sweden. Because, as students rightly claim, why bother going to school, to prepare for a future that might not exist? Why bother studying science, when policy makers continually refuse to heed the warnings of our world’s best scientists?

Why not listen to our young people? Why not take their concerns seriously? Why allow the wealth of a few to put at risk the future of the entire population?

Students and young people have a right to be angry. They have a right to be scared, and to be demanding change. Across this country, and around the world, children are standing up for their voices to be heard. They are walking out of schools and forcing those who have too long feigned blindness, to see them. They are shunning the narrative of “too young to care, too young to make a difference” and shouting at the top of their lungs. Forcing those who have feigned deafness to hear their concerns. They are saying, “go on, we dare you to shut us out”. 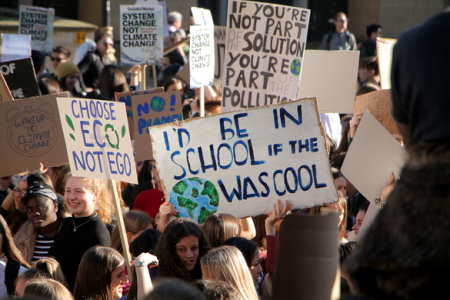 No longer can those at the top ignore the cries from those of us below. No longer can the needs of every other individual on this planet, be sacrificed for the greed of a handful. Let’s not shout over our young people, silence them, or place our hands over our ears. We need to hear them, and we need to encourage and support them.

It is time. For all of us, to start demanding these changes, pushing those in charge to act in ways that benefit us all. I am proud to stand beside these young people, not in front. I will follow them in their footsteps, as they lead us towards a more hopeful future. I hope you too, will join them.

Read the full report from the UN Intergovernmental Panel on Climate Change here.