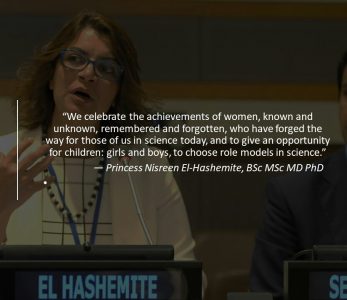 Women and Girls in Science

Dedicating the 11th of February to women and girls in science is the UN’s way of promoting gender equality, promoting the access to STEM subjects for women and girls, and recognising their contributions to scientific developments across the world.

The UN say that both science and gender equality are crucial for achieving the development goals, which makes sense really, as women do make up half of this world’s population. It would be foolish of us to exclude that number of intelligent, resourceful, innovative minds from the solving of our planet’s very greatest issues. But, that’s what we are doing. That is what has continually happened, across the ages. And, even when women have been permitted to poke a toe into the waters of science, they have been conveniently ‘forgotten’ when it comes to being acclaimed for their work.

But, let’s today not look at the why this is. Gender imbalance, in all fields and subject matters, can be argued about for days, and cannot be whittled down to one simple reason. There it is, gender inequality, and how we view gender, is due to a myriad of complex, intertwined (archaic) belief systems, that seep into how we behave in every aspect of our lives. So, let’s not unpack that today.

The fact is, there are far less women in science than there are men. The stats are there. This needs no discussion. UNESCO data from 2014 – 2016 shows that only around 30% of all female students select STEM-related subjects in higher education; these numbers decrease even further at doctorate level. Furthermore, only around 30% of all scientific and technological researchers are women. Phew.

The levels of women and girls varies greatly between subjects too, with biology at school being dominated by girls, but physics still a greatly male arena. Even with greater numbers of girls studying these subjects at school-level, across all subjects we see the ‘leaky pipeline’ effect – with numbers gradually dropping the further along the educational and professional pathway. 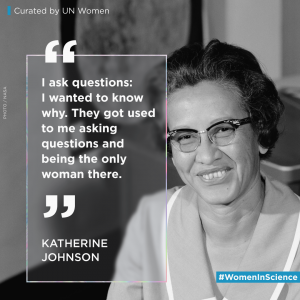 I spoke to a friend recently who received a first class masters of physics, with honours in astrophysics, and is now going on to study medicine at Oxford. Yes, wow. I asked her about her experiences and perceptions regarding the other women who studied with her, and she told me plainly – there just weren’t very many of them. Only around 10% of the students in her course were women, and the professors, except for a small handful, were all men. Whilst her experience at an all-girls school meant there was no gender disparity in STEM subjects at a secondary level, she heard plenty of stories from fellow students about teachers commenting, ‘girls won’t be interested in this’, and generally creating unsupportive environments.

Thankfully, my friend had parents who were incredibly supportive of her interest in this field, and made sure she could do anything she put her mind to. Her mother worked in medicine, and her father always encouraged the exploration of science – leading to a family intrigued and inspired to follow their enquiring minds into whichever field they so desired.

Interestingly, she also commented that she never felt she was treated differently by her teachers or professors, but some of the male students were not so welcoming. Refusing to ask the women for help, or not listening to answers and advice, she felt there was occasionally a ‘vibe’ from some male students of maintaining a gendered divide. Naturally, this lead the women to collaborate amongst themselves, and thankfully didn’t appear to affect their studies.

Whilst I’m sure we can all agree that women nurturing women is a fantastic way to inspire more young minds to follow in their footsteps, it would really be beneficial if men also fought for this. Yes, we need that large number of male leaders to push for greater numbers of girls at secondary levels, but, importantly, maintain that encouragement throughout their journey in STEM careers, so that the number of executive-level, socially recognised, and critically acclaimed women grows, to reach a more balanced playing field.

Some of the women and girls making strides in science…

In 2018, Dr Donna Strickland won the Nobel prize in physics, due to her work in the field of lasers. She is the third woman to win this prize.

Also in 2018, Dr Frances Arnold won the Nobel prize in chemistry, becoming the fifth ever woman to do so.

In August 2018, more than 80 girls from 34 African countries attended the first Coding Camp in Ethiopia. The African Girls Can CODE Initiative is designed to equip girls with coding and personal development skills, and digital literacy – setting them on track to pursue careers in ICT. 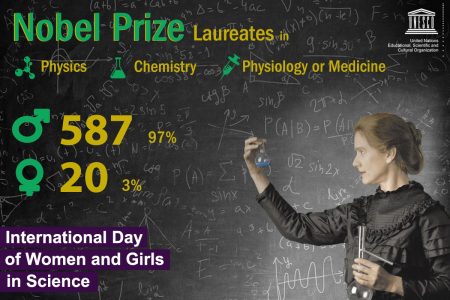 Balancing the science-scales
Recognising the influence that women and girls can have in scientific and technological advancements is just the first step on the way to creating a more inclusive industry. Achieving gender parity has been highlighted as an absolute necessity for sustainable development, and achieving the global goals.

As Lakshmi Puri proclaimed at the official UN commemoration in 2017,

“We must ensure that women’s participation in innovation is not the exception, but becomes the norm.”
Read her full speech here.