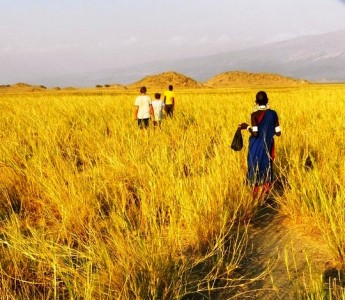 Mind the Gap | Gap Years & the road to self discovery

I am sure by now many people have seen or heard the news about a group of young Western travellers who are currently on trial in Malaysia for stripping off and posing nude for photographs (later posted on social media). The event in question is not just about the charges of “indecency” but that fact that this took place on Mount Kinabalu, a sacred mountain on the island of Borneo, Southeast Asia.

The words “disrespectful” and “stupid” have been used by the authorities and (in retrospect), the accused. What has caused such strong emotions among local people was not just the act of stripping off on what is a very sacred place but the completely unforeseen, tragic event that followed of a 5.9 magnitude earthquake in the area that killed 18 people including children. The two incidents appeared to some indigenous locals to be connected.

The point of this post is not to dispute the beliefs of either party (to many people in a Western society it would be put down to juvenile behaviour and not much more said) but rather to raise awareness among young people in the UK of the need for more cultural understanding, especially empathy, before heading off to an environment that is significantly different to one’s own. The problem in this situation was that there was simply no understanding or even recognition by the travellers, however unintentionally harming the act, of the relationship between one’s actions (a ’cause’) and the effect that they might have on the surrounding indigenous environment, whether this was a physical one or a spiritual, emotional one.

As a consequence to their actions these travellers, however innocent their intentions and “stupid” a mistake made, now face global humiliation and a stint in a Malaysian jail.  Not the Gap Year of their dreams, I’m sure.

The travellers in question were young and as mentioned above, on a Gap Year, taking time out to explore the world before going ‘back to reality’ and the daily grind of life. The purpose of getting nude was for the fun of it, in some ways part of their rite of passage to self-discovery and freedom of doing whatever it was they felt like doing after years of exams and someone else’s rules.

Gap Years on the whole are an incredibly popular, fun and a “once in a lifetime” type experience to take. They’re also very often associated with a certain amount of privilege (of course it costs money to travel far afield without a consistent income) and for the most part, Gap Year travellers don’t intend to work, they intend to have fun.

Gap Years are big business. British parents spend as much as £995 million per year helping to fund their child’s Gap Year (!) and with the average Gap Year costing around £3,000 – £4,000, this means roughly 22% of young people cannot afford to take a year off to do it. Only 10% fund their own Gap Year travels.

So with the cost of a Gap Year being considerable, what’s the allure of one? Well, for someone who is proud to have fallen into the 10% category of funding their own Gap Year at 18 years old (not that glam, it involved scrubbing toilets, cooking and cleaning from dawn till dusk!) and then taking a subsequent one at 30 years old (this time further afield in East Africa), I can say from personal experience, it’s for the adventure.

Travelling is adventurous, it’s going into the unknown, often with unknown people, making new friends, reinventing yourself (if you feel the need), learning new things, constantly, experiencing cultures and environments that you would never find at home. But with that adventure the traveller suddenly becomes quite vulnerable. By delving into the unknown you’re not only putting yourself at risk but risking your impact on other people and their environments.

With the above in mind it’s important that young people are educated from a younger age about the impact of cause and effect, the importance of learning in context and empathy towards other collective peoples’ beliefs and ways of life.

More often than not, Gap Year travellers undertake a route of travel through countries that are significantly different in culture and environment to their own, whether that’s visiting it for a few days or a few months. In such cases the actions that one thinks may be in their world, funny and light-hearted, can be taken in a completely different way by other’s in theirs. One of the key issues with the story of the foreign travellers in Malaysia was their lack of empathy and understanding of their actions in respect of the local beliefs. Of course these people were young, probably it was their first time travelling independently from their family or a school and therefore, they were bound to make mistakes along the way. Unfortunately what can be considered a young age and a naive attitude in one society does not necessarily translate the same in another.

Again, going back to the route of what makes us behave in such as way (these young travellers were not the first to make such mistakes and nor will they be the last), it’s the lack of pause for thought about the environments you are entering and travelling within.

Within a school learning environment the role of SMSC (spiritual, moral, social and cultural) development as well as PSHCE (personal, social, health and citizenship education) can help young people to broaden their perspective on the wider world. Such educational focus can also help to view how our own individual journeys of self-discovery can be carved with the most positive impact, so that if or when we do decide to venture overseas, explore new territories, meet new communities and learn new things, we can go about it in a safe and peaceful way.

Our new programme Mind the Gap, offered as a school speaker session or a half-day programme with life skills and careers building tasks, explores the world of Gap Years and volunteering overseas. As a non-Gap Year organisation, Bright Green Enterprise is not here to pitch Gap Years as the be all answer to life after school but rather, encourage global perspectives and raise awareness and the ability to take on a Gap Year or volunteering experience with confidence and a well-informed attitude.

The road to self-discovery might well be found on a trip through Gap Year land but it’s route is fraught with obstacles and challenges (else we wouldn’t learn anything). It’s also filled with fun, adventure and the opportunity to build and discover one’s skills set.

Since writing this it’s just been announced that the travellers have just been handed a three day jail term by the Malaysian authorities as well as a fine. It’s not pleasant and I’m sure they along with their families will be deeply concerned for their well-being, and deeply remorseful of their actions. But when you’re on the other side of the world and in a very different cultural system, it could have been worse. A lot worse.